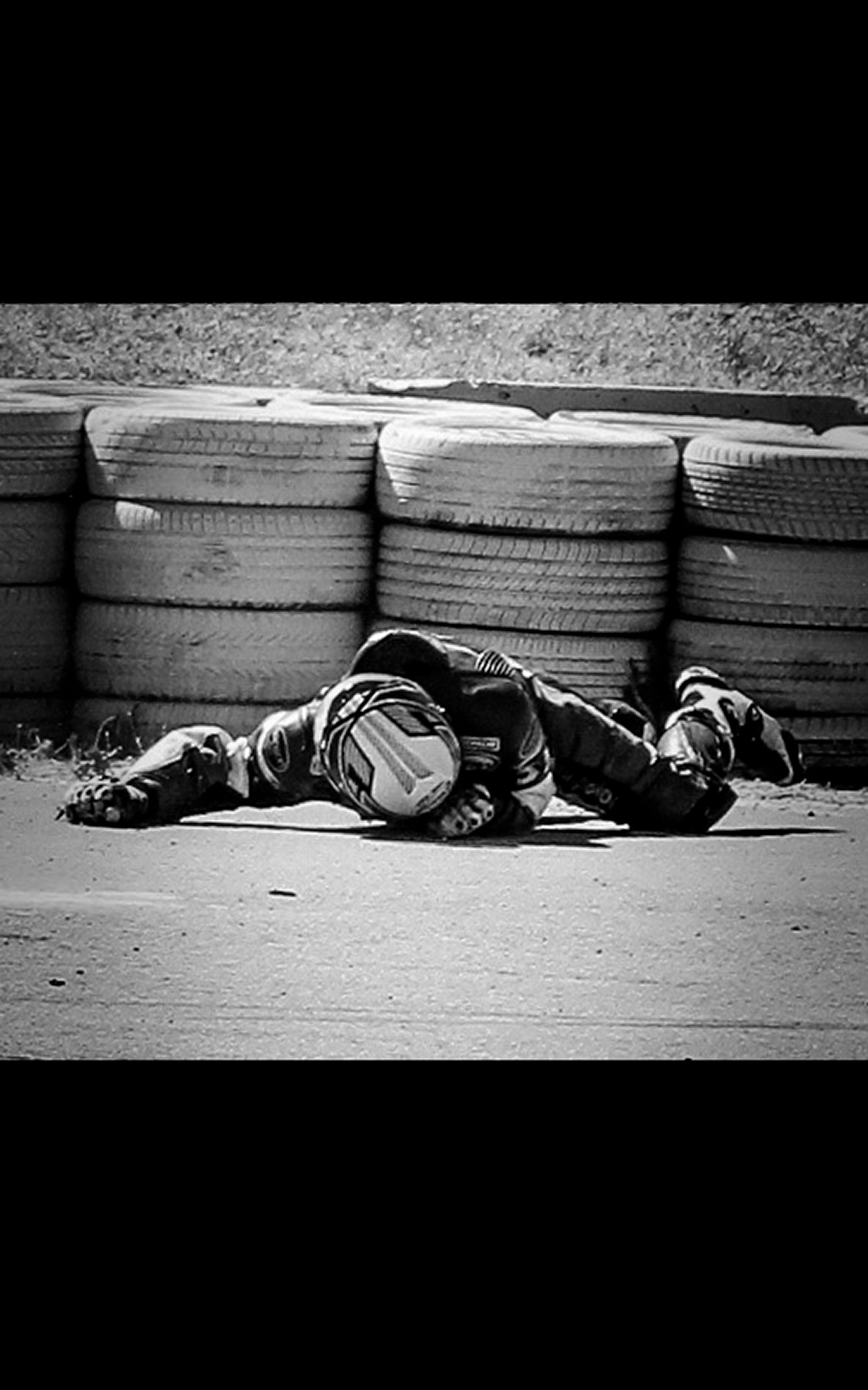 My knuckles cry all day now, especially reaching into my pockets. My right leg stays bent when I walk, it can’t straighten or kneel. My foot turned black last night, I’m swollen all over, my lower back took a shot, and somehow a hundred hammers beat my knees in my sleep. Other than that I’m fine. Except my head. I’m all twisted inside now about how to avoid this happening again. So far there is no way, this is out of my control. And that feels wrong.

My bike is another story. I love that thing. It’s more than simply what I race. It’s why I race. Sometimes it’s a pain in my ass, but isn’t anything worthwhile? I wish I could share with you the comedy we endured the week before this race but now is not the time. It’s pretty bad.

As we tumbled through the dirt and road together, forever it seemed, I remember trying to keep my arms close. Trying to roll with the energy instead of fighting it. Something hit me at the start of it, I’m sure it was my bike. It pulled my right arm away from me, my glove got snagged on the bar or something. There are scratches on my wrist; maybe that’s where they came from. I remember the pulling yanked me on my chest like a doll. I bounced between the bike and the ground. It felt like I was in the middle of two ferocious dogs fighting – one made of metal, the other dirt and pavement. Both were bigger and stronger than me, yet there I was between them begging to survive.

The sounds were intense; fearful even. The scraping, the gouging, the dizzying revs of my twin cylinder motorcycle careening through the air behind me were haunting. As much as I am drawn to that machine I would have run from it if I could have. But I couldn’t. Not even when we finally stopped.

There I lay, my face on my arm, my chest to the ground. I knew I had all my parts, I could feel them, but I had scarcely little control of them. My first attempt to reach my knees failed. I fell back down. My second attempt was only slightly better. Eventually I managed to stand and turn to the corner-worker’s post. I signaled not to throw a red flag. Not to call an ambulance. Not to stop the race still going on behind me. After all we hadn’t even finished the first lap when this happened.

At first I wondered what we always do when things go terribly not to plan; “How did I get here? Where did I go wrong?” I thought these things as I stumbled like a drunken sailor toward my new friend waving the yellow flag of warning. And then it hit me.. “That mother f’er took me out!”

I remember seeing him appear on my right side as we rushed toward the bridge. He had momentum from the long straight just behind us. I’ve gotten passed there so many times in the past. This is the curse of the perennial Underdog, the Achilles heel of a bike with less power, the cost if you will of taking the road less traveled. Sometimes this pass comes for the win, sometimes it’s just for position, but always it happens the same – the faster bikes shoot past me on my right, or pull even with me on my right, and together we head under the bridge toward the right hand turn at the bottom of the hill. They stay on their line, I stay on mine, and together we explore the differences between men, and boys, on the brakes. It’s a losing battle for me though usually, at least for this upcoming turn, because having a bike to my right keeps me from turning-in until he does – as is the nature of “The blocking pass”. But this pass was different. This pass was completely different. For the first time in uncountable times, this pass was not around me – it was through me.

His bike appeared to my right, as I expected it to, but instantly he felt closer than the many bikes before his. The upcoming turn was a right, so I was setup on the left, a few feet from the edge of track to my left. Same place everyone does. The next few feet of his pass keep replaying in my mind. They keep me awake at night, I see them while I drive, I sometimes catch myself now staring into nothing – replaying the next few feet over and again. He didn’t just roll past me with more momentum; he turned into me with more momentum. As his bike drew closer to my side I moved closer to the edge of track. To the dirt. I remember this like it took two hours but really it was just an instant in time. I know this because from the moment he appeared, to the moment his passing tail section ripped my right bar from my right hand and threw me to the pavement, I shouted something almost always on the very tip of my tongue.. “What the fff!!” and that was all I got out. The rest is carnage.

I never actually cursed during the wreck. That came later, quite loudly and quite often actually. My apologies for that. I don’t go racing to fight, to hate, to curse or to regret. But suddenly I was doing all of those things. Rightly so you might say, but still it didn’t feel good.

Saturday night, Sunday night, Monday Tuesday Wednesday nights so far have all been hell. How do you stop something out of your control from ever hurting you again? How do you steer around something with no bars in your hands? A hi-side I can deal with. I know what I did wrong. But this is different. This Domino hit me.

Maybe I’ll try this: If you race, when you want to block-pass someone, stay on your line. There is no reason to swerve in front of someone (or through someone) to block them. Just being there, inside, on your own line, IS blocking them.