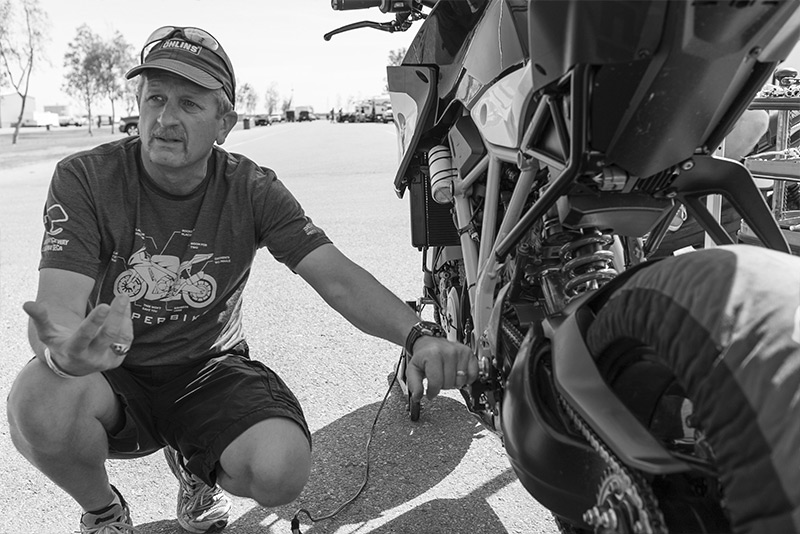 A week before 2019 AFM round-1, I got a call from a friend who I first met at a racetrack, crouched in my pit.  He’d come out of no place that day, offering to help.  I was shy about accepting.  I knew who he’d helped before, and I feared I could never live up to him.  …No.  I knew I could never live up to him.  Could you live up to Dave Stanton on a racetrack?  That’s a feeling I never shook, until this call.  Instantly I gave him our status report:  “I got our motor back from Gregg Spears, Alex is building the bike at CalMoto, Michelin doesn’t have the new tires yet but they’re coming…”  and on and on I went until I noticed something different.  No response.  Turns out Kenny wasn’t calling to find out where our program was.  He was calling to say goodbye to it.  Then it was my turn to get quiet – my go-to response to loss.

It took a minute for me to land here, but good for Kenny.  Like a veteran triple-A baseball player, he deserves to make the Show with a racer poised to make it all the way.  I never really did.  I never really will.  But I’ve never felt the need to, either.  Not in the typical sense.  Being different is a trend I fell into back in grade school, when I failed to fit in regardless of my efforts to.  So I don’t race an R1 to win Formula Pacific – the AFM’s premiere class.  I don’t race a BMW or a Kawasaki either.  I race a KTM.  The 1290 Superduke.  A bike without fairings, not built to win FP, not even built to race.  And I love the hell out of racing it.

My brother was right – you are who you were when you were twelve.

Tracy had a curious response when I told her “It’s just you and me this year kid.”  She actually looked happy.  Almost relieved – a reaction I wouldn’t understand until later.  “This is a weird chick,” I thought to myself.  “How does happy make sense right now..?”   Just then she grabbed the helm, spun my head around and righted our racing ship.  “You can change your own damned tires.  I can do your warmers.  We’ll make lists for everything…

…and no more f-king clicks!”

First practice Saturday marked a new experience for me – breaking in a Spears-Racing engine.  I wish I could tell you about the differences his work made on a dyno, but I’m not that organized.  I can however share with you the same things I told Gregg, as he curiously gazed back at me in sideways expression.  I told him the bike breathes freer.  I can feel the flow of air and gas run through it faster, easier.  I can even hear it rush through the intakes.  Where this bike used to run silent, now it chirps, even squeaks as it breathes.  With a great smile Gregg explained it’s the valve job he did – designed to flow better – he laughed out loud when I told him I could hear it.

After two break-in runs, in a curious display of incompetence, Mike Morrissey and I stripped the rear axle nut on my bike while trying to swap tires.  By the time I got the nut off, the threads looked like a car accident happened inside them.  No replacements in sight, no other solution possible, we put the new tire on and basically welded that nut to the axle with an impact gun – never to come off again.  With just three practices total we started F40 from 2nd on the grid.  To my left was Giya Myshlyayev on his ZX10R, to my right was Gavin Botha on his Aprilia RSV4 – two very powerful, sexy bikes.  …And everywhere behind us was everyone else.

To the shocking reemergence of John Fosgate’s revered “Sidewaaaaaaaaaaays GREEN FLAG” race-call, we took the first hole-shot of 2019.  And the fight was on from there.  Giya took advantage of my inability to control the wheelies that our KTM apparently loves like Candy Corn.  I swear I wasn’t showboating.  This damned bike wheelied all the way to start/finish in the early laps.  I couldn’t stop it.  The first time Giya shot by I simply held off the brakes for turn one until we had the lead again.  The next time he passed earlier, I couldn’t make up the difference.  So I watched him ride for a bit.  I gauged distances, I noted his lines, I wondered how comfortable he was leading.  Giya and I have battled before.  I don’t know him from Adam, but I can tell by how he races that I like him, I trust him.  So I nudged up closer to him through Riverside – a very fast-banked sweeping right hand turn that measures far more than your will, or your skill.  It measures ballz.  And thanks to what I honestly feel is the most joyful motorcycle that I have ever raced, and surprisingly enough the best prepared suspension, thanks to Mike Castro, I was feeling great, big, ballz of fire.   So I crossed from outside his line to inside, behind him, as we exited Riverside.  We flipped our bikes from right to left and I put the pedal to the metal, came around his outside and out-broke him for the Lost Hills right-hander.