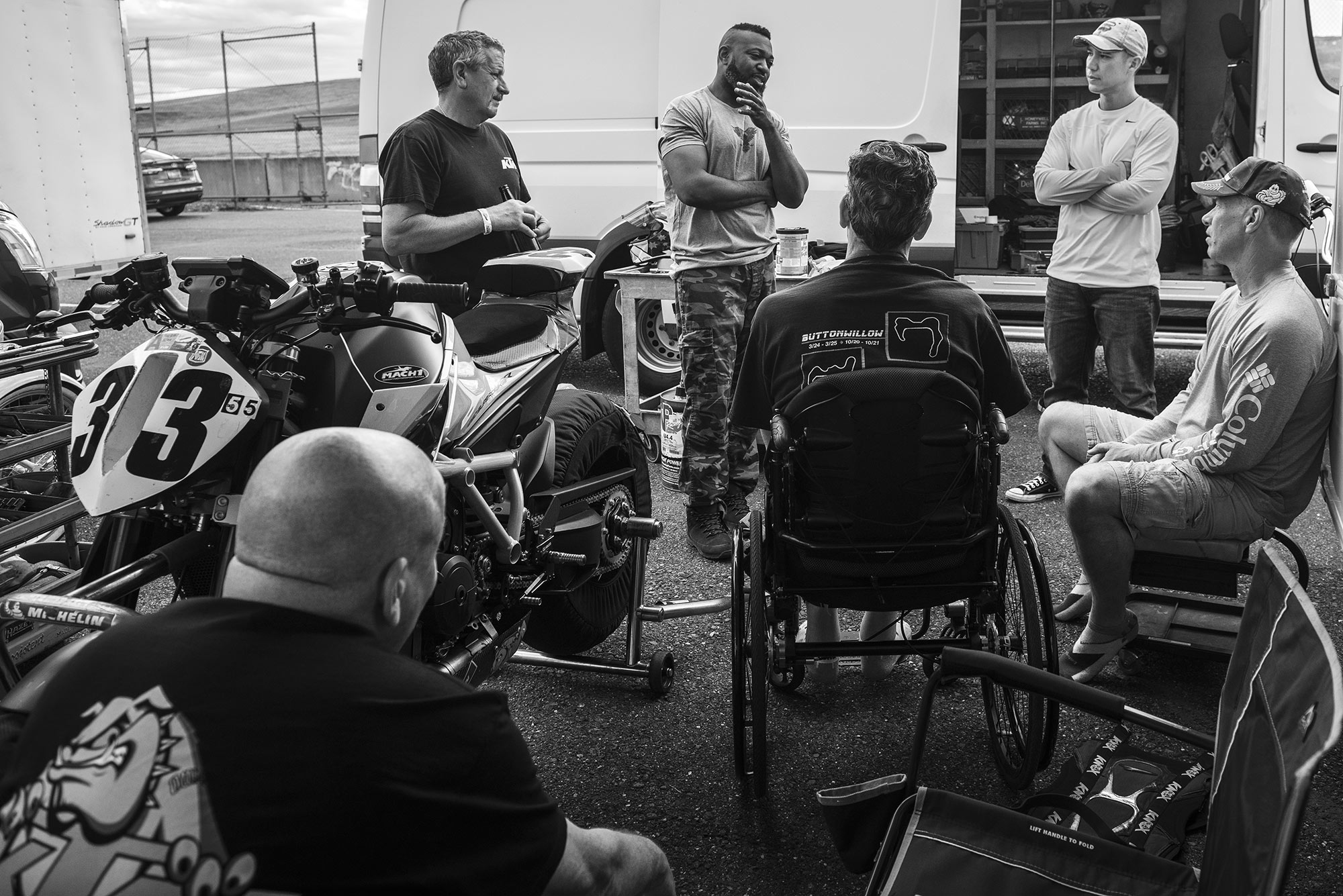 Although I am a gifted problem solver, I have learned to accept that I may never find the answers to all my challenges in life.  I have denied this forever it seems, so finally acknowledging it feels liberating.  Like a swollen-eyed prize fighter leaning into an outclassed bout, I understand now it is inevitable – some blows will be too much for me.  I have asked for help when those land, but at times doing so has only made things worse.  There is an art it seems in recognizing what questions you should and shouldn’t ask someone to answer for you.

In the years that Valentino Rossi struggled and failed at successfully racing a Ducati in MotoGP, his one consistent complaint was “the front”.  No feel, no confidence, crashes out of nowhere and for no reason.  Rossi, the guy who made a career out of always finding a way, without a front-end that he understood, was lost.

I too have felt a little lost on our new Superduke this year.  Although on paper this bike is better, I just don’t have that feeling yet.  I could put our old Superduke anywhere at any time.  Under someone, around the outside, in-between riders, wherever.  I aimed and it went.  For all the disadvantage we endured on the straights, it came back in the turns on that bike.  And then some.  But that feeling is gone now.  My roll-speed through turns is so slow I sometimes feel like passing myself!  And what’s holding us back is mechanical, not emotional.  I can feel the difference.  But I can’t solve this problem on my own.  Or at least I’d convinced myself that I couldn’t.  As a result, I made the same desperate mistake that I’ve made countless times in the past, for decades, and on both coasts.  I asked someone to fix it for me.  And it hasn’t gone well.

I saw Bill Fordyce Saturday evening.  He’s the starter for the AFM.  He spends most of the day up in a tower over the front straight, far from people or interaction but with a great vantage point for observation.  When he asked me with perplexed enthusiasm, “GoGo, what in the hell is up with your setup?!”, I knew my problems had come to a head.  He told me they’d been talking about my bike on the radio, how it was all over the road.  Note to self:  When your setup is the topic of discussion on the track radio, you are not special.  You have special problems.

I knew immediately what Bill was referring to.  Quite honestly, I felt comfort in someone else seeing it too – like finally I wasn’t alone out there.  And I wasn’t a whiner for describing how hard our bike is to hold onto while leaning through turn three.  It bounced so violently over bumps I’d never felt before that even my line of sight shook up and down.  I nearly hi-sided three times exiting two turns and entering one.  And going into turn one, a perilously fast 5th gear turn at the end of Thunderhill’s front straight, our bike protested so badly that I couldn’t maintain my body position, never mind my line.

I am a visual thinker – so there I was riding as hard as I could while trying to shake the sight of three Doberman Pinschers chasing me through a junkyard in a late-night horror movie.  On my third run back to the pits I begged, “Please put it back where it was.  At least I could ride that.”  It never made it back.

To be honest I’ve even felt proud at times about how critically I can break down a turn, a bump, or the energy I feel running through a bike at speed.  It’s like time slows down.  What takes just a second or two on track, I can talk about for ten minutes off track.  But when you consider how bad our bike was, at that moment on that day, maybe all my critical feedback is worthless.  Or is it what I am doing with my feedback that is failing?  Either way I overheard the comments of someone I had passed out there in F1 qualifying, “Did you see GoGo almost hi-side out there!  ..Jesus, why does he even try?”

I did not acknowledge the comment, or the person.  I kept walking like I never heard a word.  But I’ve replayed that moment on a loop ever since.  It’s not the question I am stuck on, or its answer.  It’s not even that someone asked it about me.  It is the acknowledgement that I am still as far off as I am after four rounds, while I’ve been trying so hard to not be.  I quit sugar six months ago, which for me is like driving past Disney’s front gate 180 times without ever entering.  I work out daily and ride my bicycle so often my ass has nightmares about seats.  I have GP cartridges in my forks, which are currently on their third set of spring rates, and I recently installed my third shock from two different countries in four races.  Considering all this effort, and my presently ailing predicament, admitting I am more inspired than ever might sound odd.  But that’s the beef.  I love the hard in this.

One week after round 4, without an upcoming race in sight, I packed our program up and headed back to Thunderhill.  I pitted by myself early morning and methodically went over our bike with a fine-toothed comb.  I checked every setting, measured every height, installed our finally arrived after months of Covid-delay MUPO shock, and made notes of everything.  Turns out there was a reason my head shook through turn 3, and why this Superduke tried several times to launch me into space with Jeff Bezos.  Two of five clickers were maxed out, which basically renders them useless, and the other three were just two clicks from max.

Our forks were so stiff, hard to impress even while holding the front brake and lunging forward.  And the rear was a steel reinforced brick.  None of it was even close to good or right.  In fact, in all the bikes that I have raced, measured, setup and pushed on, this was close to the worst of them.  I sat back quietly in the warm breeze of the Central Valley, to the drone of bikes swarming in the background, and came to a realization that for me has been a very long time coming.  This is not our path to success.  Going forward we need to use my feedback to make our own decisions about setup.  As tempting as it is to offload this burden onto someone else, I’ve got to take this punch squarely and not only survive it, but draw strength from it.  The last thing I did before getting back up was make a quiet promise to Kenny Norman and Mike Morrissey, two guys I am so blessed to have in my corner this year; “I will never ask someone to fix this challenge for us again.”  And then I started over again, from the beginning.  I turned all our f’ing clickers back to day – 1.  I reset all our spring rates and preload.  And I took our beautifully rebuilt Superduke out for her second first ride.

I sat across from a hero of mine recently.  A world class racer.  A guy I’ve raced against several times over the years, but never once with.  He was always faster.  I felt the temptation to ask him too, but didn’t…  Instead we simply talked shop, for hours – which led to the most inspiring thing I’ve experienced at a racetrack.  I saw light again where it’s been dark.  Purpose replaced defeat.  And somewhat like a preacher on any Sunday in Georgia, that hero inspired more forward-facing thinking than he will likely ever know.

I feel good about the rest of this season.  I now even have goals – one of which is to win the very race that questions my ambition.