A Yamaha bit my ACL in half ten years ago. I got it fixed but it’s never been right, so I went to the doc to arrange an MRI. The nurse told me to step up on the scale. I asked her why, it’s an MRI. “Standard proceedure.” Instantly my desperate quest to avoid all things measuring since we quit racing last August, was about to rudely end. I stepped up. Far too quickly she said, “209lbs, ok you can step down now.” I refused to move. “Can I take my wallet out and try again? Maybe kick off my shoes? Is there a men’s room nearby?” She shrugged her shoulders like it didn’t matter, because it didn’t, to anyone other than me. I suggested we cancle the MRI and call an ambulance for the heart attack I was about to have. I’ve never been over 200lbs in my life. She had no response. 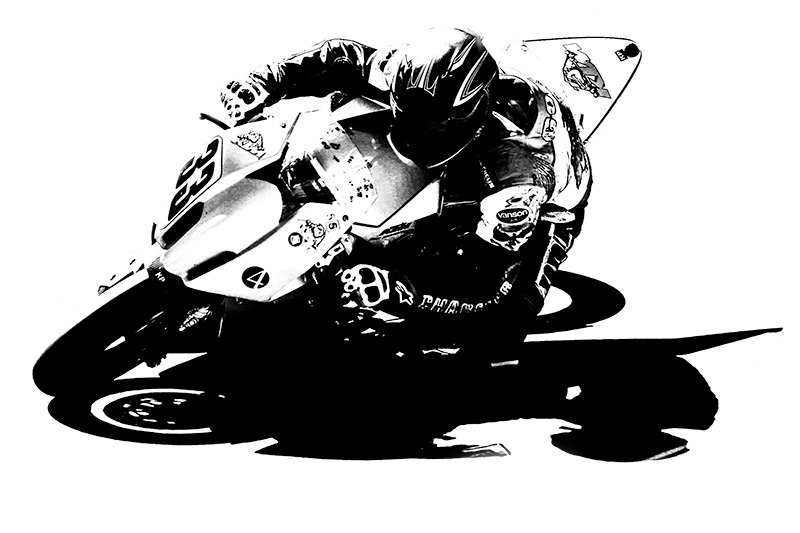 Saturday morning in Sonoma found Jeremy and I ready for practice, by the first practice – which is a first for me since moving to California eleven years ago. Alex warned me not to be proud of that, and I am not. What I am proud of though is what being ready meant. Growth. Finally I am achieving the first of my two goals this year – to beat my younger self with my older self. I am also slowly wearing down the lion’s share of excess weight I recently put on my body. Oh the lonely miles I have pedaled to get that number back down below 200.

So things are progressing. I am not satisfied, thankfully, but I am proud to not simply be falling anymore. Still though I went into this weekend afraid. Not afraid of the track, not afraid of our bike or our competitors. I was afraid of me. Sears is a physical track. I am a physical guy. I work with a hammer, remember, and while I do have a delicate touch when a delicate touch is my focus, when it’s not I typically break things. The last weekend we ran at Sears I saw the name Chris Fillmore on our Open Twins grid, riding the HMC KTM RC8R. My heart sank in my chest. Chris is a pro, his bike is unworldly compared to ours and he couldn’t have cared less that we were even there. I should have cared less about him but I couldn’t resist. I made a conscious decision, against the will of my team, to not have a delicate touch that Sunday…   and I ended up on my head. I keep asking myself, “Why did I chase him? Why did I take that risk?” Such a fight makes no sense, looking back, but with my paws wrapped around our KTM’s grips, on that grid, on that day, chasing Fillmore made all the sense in the world to me. It’s a regretful part of my nature. I am a fighter. And sometimes I fight things I should not. So when I saw the AFM put Formula Pacific before Open Twins this weekend, my heart sank again. I want to fight those guys in FP – nothing delicate about it. In fact I want my framing hammer, but we can’t afford even the slightest mistakes for Open Twins right now…

It was Tracy again. It was Paolo, it was Jeremy, it was Alex, Matt and Derek Lafontaine. This time everyone agreed – run just three laps of Formula Pacific, to test our new clutch, to test our new settings, then pull off to fight another day. We’ve got business to take care of in OT. 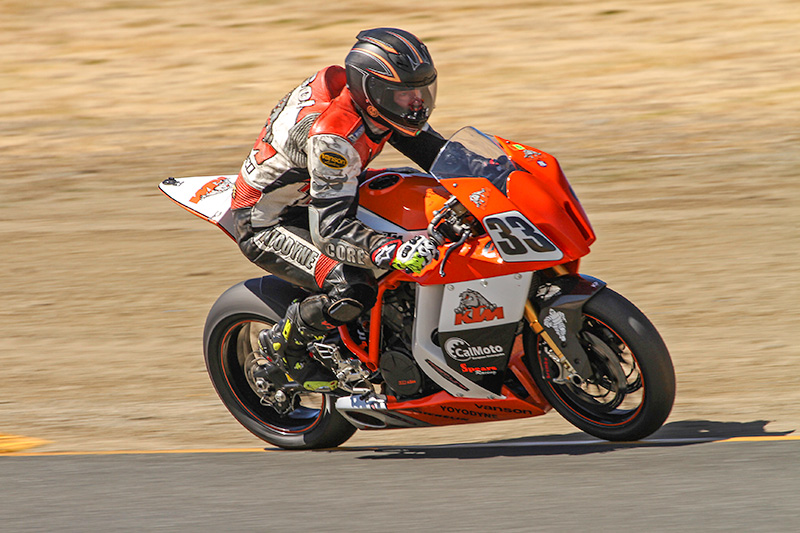 We qualified 14th for FP. Embarrassing. Something is wrong out there and I cannot figure it out.  Everyone exits the Carousel, and I mean everyone, much tighter than us, much harder than us. In Saturday practice we made a lot of changes, all of which affected our issues but none of which solved them. I changed my lines, I shifted my weight, I pushed places I don’t typically push, I drove sooner and I drove later. Nothing doing, we were shit coming out of that turn and others. Actually any exit where you have to accelerate hard, we struggled. Which is, well, ridiculous when you think about it.

We missed Sunday morning warm-up due to our clutch. It did nothing but slip all the way around that first lap, so I pulled in. Jeremy had installed a fresh clutch pack the night before and obviously something went together wrong. He took it apart as I watched over his shoulder. He was frustrated, he was panicked, and he was in denial. In fact before he took it apart he looked back at me, trying mostly to convince himself I think, that maybe it just needed to be bled? Nothing doing, I knew something was mechanically wrong inside there, I could feel it in the lever. As he got deeper and deeper into the now disassembled clutch I asked him, “Well, what do you think? Do you see anything wrong yet..?”

Jeremy is not as old as I am, but he’s also not a kid anymore. He’s somewhere in the middle of the fascinating transition that is life. As I watched over his shoulder with the clutch now in his hands I listened to him speak. “Well maybe last night, with all the horsing around (it wasn’t last night it was yesterday afternoon, and there was no horsing around), it could be someone distracted me or something” (nobody distracts Jeremy, he’s a machine). “I don’t really know for sure but the one thing I have my eye on is this one fiber plate which I’m not sure, but it may be in the wrong place?” At this point I looked down at the clutch plates, all stacked in a row, all with their tabs perfectly in-line. All, that is, except for one. Quietly a smile cracked from my otherwise concerned looking face. “So…. You think that might be our problem?” Jeremy solemnly directed his response toward the clutch – as I was standing behind him, “I can’t say for sure, yet, and again, maybe in the confusion last night something happened..” To that I responded, “You named your son Tru, right?” …That pretty much flushed any tension straight out of the moment, as we both laughingly re-labeled the incident a common mistake. The type humans make.

It’s more common to welcome our new years by grieving our lost ones but I think that’s a mistake. There’s something liberating about growing older.

Just about everyone was in front of us on the grid of FP. That’s my penance for not yet understanding setup like I should. I’m not sure yet why the ridiculous things I do to launch a motorcycle never caught on, but maybe I should be thankful.  We jumped one row off the start to eventually find, yet again, Jason Lauritzen’s back tire going into turn two. My goal was to work our way into the pack of the very guys we ended up among – Jason Lauritzen and Greg McCullough – just to see where our bike was. To see where I was. It took just three laps to confirm my suspicion; we are on the pace and we are off the pace. Mid-turn, and exiting turns, we are shit. My drives out of the Carousel took us so wide that on the last of the three laps we planned to do, I actually went through the dirt. Everyone else around us was mid-track, happily charging up the hill while I was way out wide like I was on a hunting expedition or something. Greg came up to me after the race and mentioned, “Hey, do you know the track goes left there?” Between his comment, and the texts Joe Salas was sending me about our bikes wild looking drives Saturday, you’d think I would catch on to something about our setup. I never did. 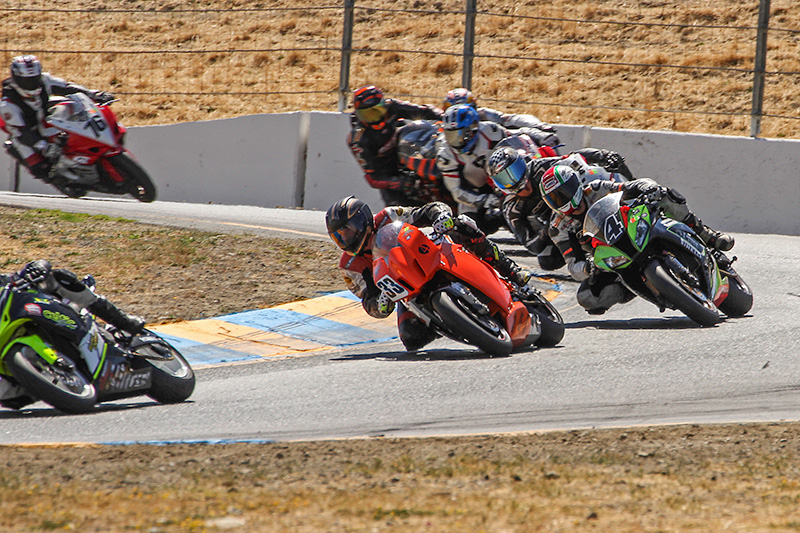 Jeremy said my composure was totally different this round. It was nerves. As I get older I seem to appreciate things more than I used to. When I play ball Friday nights I shake both umpire’s hands before each game. I listen to my wife more now, I call my Mom and I apologize sooner when I screw up. Everything now, including this year’s AFM Open Twins Championship, means more.

We took the hole-shot and built a decent lead right from the start. Things were as good as they were gonna get this weekend. Our setup was still way wrong, we still had no clue why, so I just rode the crap out of it as it was. I pushed hard where it fought me, I forced it places it didn’t want to be, I rode around problems I wished we had solved. I thank our Michelins, which honestly we relied on. They were our crutch. Just past halfway we went hunting again, out near the dirt outside the drive from the Carousel. I moved my body to an awkward position to fight the bike better, and I missed the next upshift. Instead of the next gear I got it stuck in a false neutral that it took me forever to sort out. Bam, Tiger Boy was right up our tailpipe. I saw Jeremy’s signals. He kept telling me to run like hell but I couldn’t anymore. The deeper the race got the harder it was for me to manage decent laps on our bike. I wasn’t tired. I wasn’t making mistakes. Our Michelin band-aid was wearing out. With one lap to go I rode protective lines and guarded our lead. We ran through the checker in first place, and suddenly the weight of six worlds was released from my soul like a flock of white doves. All of the nerves, all of the miles, the decisions to back out of FP to conserve the one tire we had to use for both races, they all paid off.

The two goals I set for myself this year have now increased to three: Beat my younger self with my older self, run sub-1:50s at Thunderhill, and now – win Open Twins.

Round 7 here we come…

Stay safe and thanks for reading,
GoGo