One of Tracy’s least favorite things about me, in competition, is also her most favorite thing about me outside of competition. Generosity. Often when I discover a secret that gives me an edge, I offer it to those who oppose me. Why help a competitor I am trying to beat? Because the better they are, the better I need to become. The more intense our fight. The more meaningful our competition.

In one month’s time I will lineup, grip to grip, in one of the most populated and competitive classes in the AFM – Formula 1. I haven’t raced Formula 1 since 2006; when I was younger, better looking, and raced a faster bike. How and why this is happening is a story for another day. The story for today is the secret that I offer to all who will oppose me then.

Among my 2019 season of never-ending setbacks, there were some shining lights of brilliance that I am still quietly beaming about. The yards my KTM could make back up on the brakes chasing Corey Call. The miles we stretched on competitors through tight technical switchbacks. The way my bike would push its rear into the pavement through wide open kinks like the left before Buttonwillow’s Lost Hills, or the exit out of Sears turn 4, and my favorite kink before Thunderhill’s turn 8. All those feelings continue to inspire me. But my favorite moment of 2019 was watching in awe as Jason Uribe passed my arch nemesis around the outside of Thunderhill’s turn 3, exactly how I had just done three races before. Jason is faster than me, his bike is stronger, he’s better looking and 30yrs younger – yet we carbon copied that rarely executed turn 3 outside pass on the same line, over the same bumps, around the same rider, on the same day. But don’t think for a minute that we did it the same way, because we didn’t. He used more skill and a better all-around package. I used more tire. In fact I always use more tire. And I typically do so until I have stretched that tire’s lifespan so far beyond responsible that even its round shape has morphed into triangle. And even then, it’s still fun to ride fast. At my tire’s worst last season, which is an important time to talk about a tire, they were still predictable at racing speeds. And at their best, well, they were simply awe-inspiring. And they were always better than me – which if you think about it, is there more you could want from a tire?

When Michelin first released their new Power Performance slick last year, there wasn’t a lot of information about them. So, dialing them in, setting the bike up to get the most out of them, was a process. By mid-season Oscar and I had nailed it. We had so much new available grip suddenly that I had to go up in spring rate, because the cornering force we now generated was overwhelming our rear shock. No exaggeration, once while leading a race I pushed so hard through Thunderhill’s wide-open turn 7 kink that the rear shock collapsed. The rear of the bike completely sat down mid-turn. I crossed the bars to stay on-line, but when the rear came back we were now pointed out into the pasture. It was a hell ride no doubt. Quite a memorable way to learn that considering forward driving edge grip, there was a new Sheriff in town.

Fuzzy was the guy who helped figure the setup to handle the new cornering forces that the tire was generating. As far as riding out on track, I hadn’t changed anything. I pushed to the point of diminishing return, just like we all do every lap we race. The difference was Michelin had just redefined where that point exists. And the lap times dropped.

I always find it fascinating when I land a new lap time. I ask myself what I did different. Mostly my answers point to many little things, more than one big thing. But last season it was one big thing.

Good luck out there this season boys and girls, 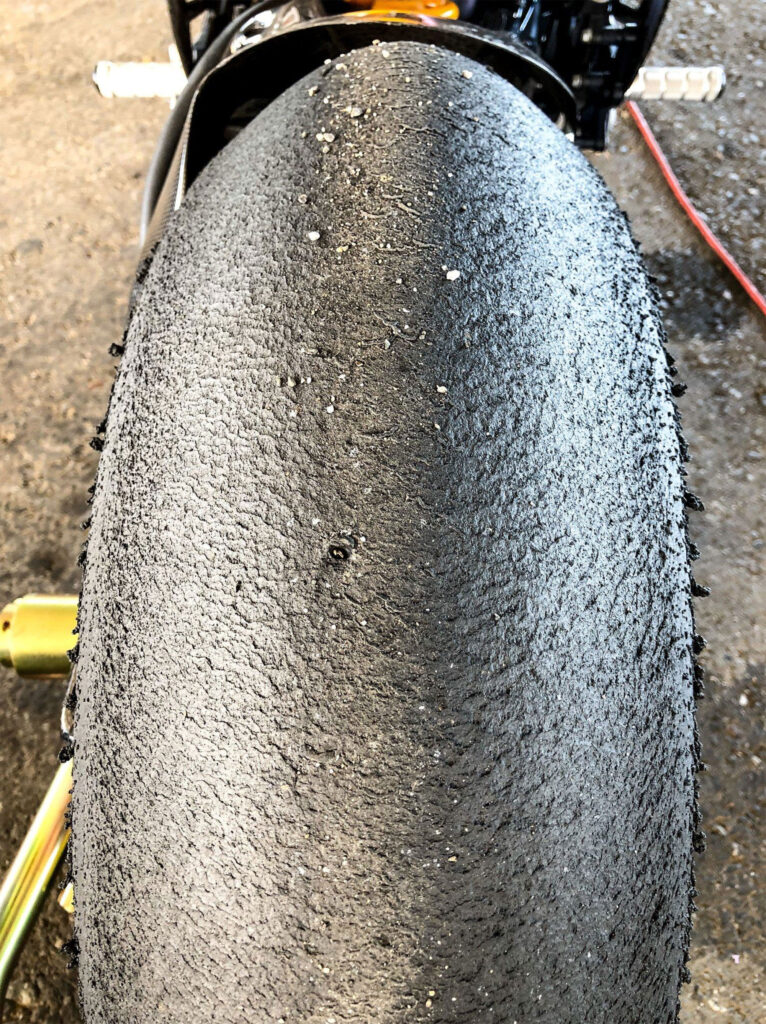