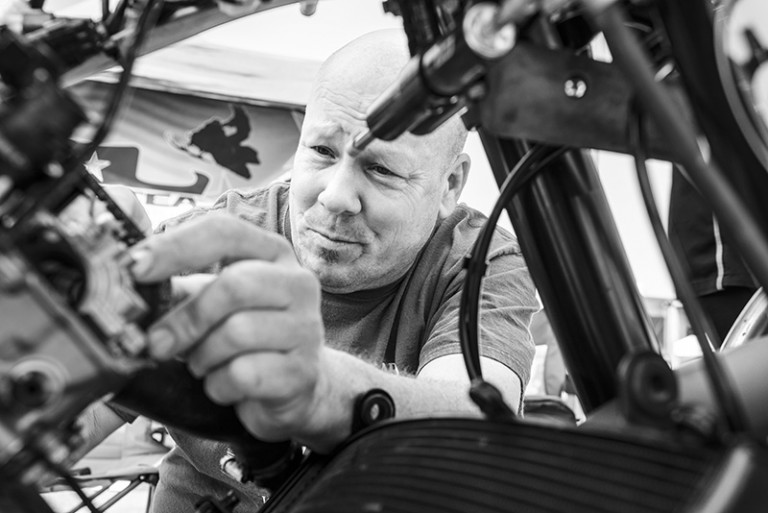 Today I searched my 2015 race folders for pics.  Typically these folders are filled with laughter, Tracy half dressed, a few wrecked bikes and lots of pics at speed.  This year’s folders are filled with pics of asses.  Everyone’s asses.  Nearly every pic I took last year shows somebody bent over working on our Superduke.  That was the theme of 2015 it seems – if you entered our pit you went to work.  In a way I guess that could be taken as a very fond memory.  But I don’t take it fondly.  It’s a sign.  A sign that I failed.

Failures seem to be evolving for me.  Used to be I hid from them.  When I couldn’t manage that anymore I began hiding my mistakes from those around me.  I did that as long as I could as well.  But hiding doesn’t work because it’s a lose lose choice.  Few are ever fooled and you cannot learn from that which you hide.

I was introduced to KTM by the late Kari Prager, and Mike Meissner.  We got along so well that I raced under their Tri Vally/Calmoto flag for eight years.  Think about that for a second.  First imagine how hard it is to become sponsored.  It’s hard.  Now imagine how hard it is to maintain that sponsorship.  It’s harder.  Now multiply that by eight years.  Something has to be very right, at the core.  And it was.  So when Mike told me last winter that he and Calmoto decided to stop road racing, for various reasons, I told him I would continue the Calmoto fight on my own.  And I did.  And it nearly destroyed me.  Me and everyone around me.

I really love the 1290 Superduke.  I love the challenge of doing things few do.  I love going left when most go right.  I love winning, regardless of a handicap.  But this year we didn’t win too much, and our biggest handicap turned out to be me.  That’s the stifling thing about 2015 – typically I fail when I don’t try hard enough.  When I am lazy.  When I didn’t care as much as I should have, or could have.  But I did try last year.  I did care last year.  And still I failed.

I knew the year was faltering half way through, but I kept trying.  I knew when our motor blew for the second time, the year was a wash.  Why go farther.  But I also knew something nobody around me did – that we could actually win before the year was out.  I knew it in my soul.  So I worked for that win all year regardless, and it took all year to get us there.  In just one lap we won the final hole shot of the year, we gapped the field, we left all our struggles behind us.  That single lap kind of made it all worthwhile.  Finally.

…and then I lost the front at Buttonwillow’s Bus Stop.  In a flash all good was gone.

Someone told me Tracy screamed from the observation deck – a word that started with a capital F, had countless uuuuu’s in the middle, and ended with a devastating K.