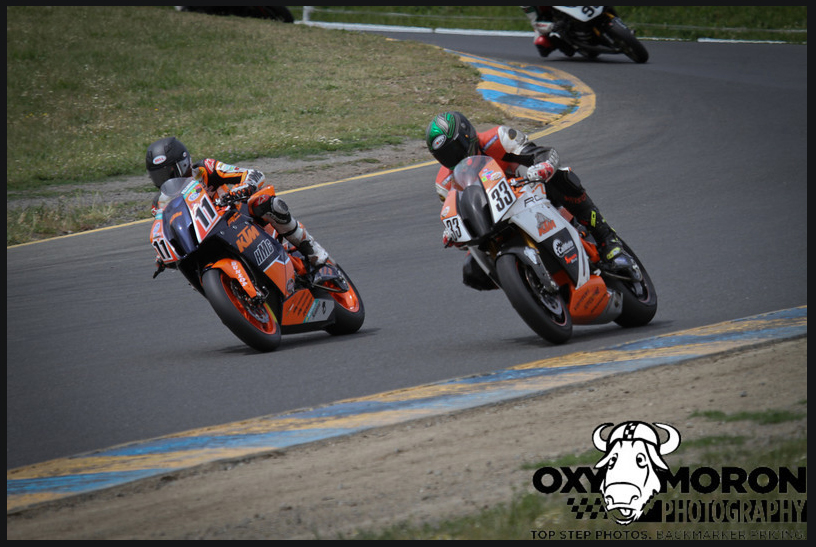 I’m a little off still, going into the Carousel-turn 6, which he took advantage of by coming up our inside. Again we were side by side, and still I was comfortable. I eased up through the Carousel, with an idea to drive up his inside on the exit. I wanted the most from us, nothing left on the table. But his bike is monstrously fast, he left us on that back straight. Our bike is exceptional on the brakes now, we entered turn 7 faster than him. He was still pretty close through 7. We charged through turn 8 and into 9 we made a little back again. He was leaving us no doubt, but I was happy with our pace. Things were happening faster, the rhythm was quicker than it was in FP. I felt very good, super controlled and hitting my marks. Then suddenly like a huge water balloon it all burst into nothing. I nailed our marks through 3a, nailed them into 3. Then suddenly while still at full lean, just as I hung my elbow over the paint at the crest of turn 3 – it’s like someone triggered a bomb under the back of our bike. What just an instant ago was a beautifully in-sync KTM RC8R leaned over beneath me, had suddenly become a wild bull – kicking me off it like I’d entered it in a rodeo or something. I held the grips in my hands as my feet, reportedly, flew straight up over my head. I was totally inverted at the crest of the hill, handstand on the bars with no bike beneath me. I fell back down, still holding the bars, but landed on the pavement. Suddenly I was dragging next to our bike, at full race speed. What would you do right now? Probably the same thing I did – remember Randy Momola’s cowboy side-saddle hell ride, from way back in the day.

https://www.youtube.com/watch?v=GC-8Mwp-rTc&t=2sI can’t say I thought I’d save it, but you can bet I tried. It all happened in an instant, the bucking, the struggling to lift myself back on, my lower legs dragging behind – I didn’t want it to end like this. I am not positive what happened but I think in the bucking my right hand lost grip on the bar, which stole us the fight to get back on. I got flicked again, this time over the top and onto my back. I knew Metz would be coming around shortly so I had a conversation with him, as me and our KTM slid most of the way to turn 4. “Come on now Steve, you see me here. Do the right thing…” and he did. Thanks buddy.  But I’d woken from the dream, our race was over.. At this point I choose to focus on the positives:
1 – I hate our green helmet. I threw it to the ground 50 feet from the corner workers station where we ended up just so I’ll never have to wear it again.
2 – Something pretty substantial is still off with our setup. Last year we lost the rear just the same way, only in turn one. I know this is solvable.
3 – Confidence is at an all time high right now. I’ll never know on paper what our pace was Sunday because we never finished our second full lap, but I guarantee you it was faster than we went Saturday. By far.
4 – In 05 I had a tire deal. I can’t confirm the ones I got were special but they definitely had my name on them in the truck, and only sometimes had writing on the sidewall. I used to be able to run our 749R into turn 9 so hard it felt irresponsible. I’d brake so late for turn eleven you could hear the tire chirp as it skid, but the bike never fell. This defied all logic. It was amazing to feel. And I have never felt that again, until this weekend. What our bike did on the brakes, with these Michelin tires, was completely irresponsible.
5 – I talked with HMC’s head mechanic “Uli”. Told him what happened, what the bike does out there. We compared notes, our bike to theirs. I also talked with Fillmore about it. It’s only Tuesday and I have already been down to Chandler’s shop in Salinas. So far everyone agrees we are blowing through the stroke of our rear shock when we G-out.
6 – I’m giving up donuts and ice cream, which is not necessarily a positive. ShitCan hardly wait for T-hill, we will be strong.GoGo